Day 21 of incubation is usually the big day. Eggs set under a chicken often hatch on day 20, but eggs that are incubated at a too low temperature, or are older when they’re set, often hatch late. Sometimes they hatch late for no reason you can pinpoint.

Late hatches are nerve-wracking. This is when you will start second guessing everything you’ve done with these eggs, and you’ll be desperate to take them out of the incubator and candle them to check if they’re still alive. You probably should not give in to these feelings as the chance that you will cause more damage is more likely than relieving your anxiety.

I was a mess. I wouldn’t leave the house for two days and checked on them constantly for any sign of a pip. If there was any doubt before, I’m definitely a crazy chicken lady. 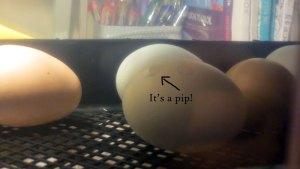 Late on day 21 it happened!

Late on day 21, the first egg (from a legbar, probably Ellie) pipped. Since I’d had some issues keeping the humidity up the previous two nights, I set my alarm to go off at 2 am and 4 am so I could make sure there was no repeat performance since low humidity can cause “shrink wrapping” in a hatching egg where the inner membrane dries out and shrinks to trap the chick. They’re unable to move, and therefore unable to finish their zip and hatch.

The humidity remained stable, thankfully and at the 4 am check I saw that another egg (Easter Egger from Phoebe) had also pipped.

In the morning of Day 22 I saw that a third egg (Easter Egger from Gwen) had also pipped somewhere along the line. The pip was in the back and facing downward so I missed it previously. I only caught it this time because it was far enough along that a piece of shell had popped off. I knew it could not have come from the other egg (too far away), and so made a closer inspection and discovered the third pip.

I pretty much spent the next four hours in front of the incubator with my camera, laptop and a cup of coffee.

Then the legbar egg hatched. And I freaked out.

I’ve seen newly hatched chicks before, but never a really good view of them immediately after. My first hatch was under a hen and even though I bugged the shit out of that hen and her poor chicks through the whole thing by taking pictures and being a general nuisance,  I didn’t yank the chicks out from under her to do so. 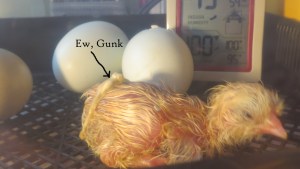 The second Chick wearing its gunk on its back.

In an incubator, this wet, oddly shaped thing pops out and there’s goop sort of trailing from its belly button (yup, chicks have belly buttons) and it looks gross and a lot like poop and poop means bacteria and OMG MY CHICK IS GOING TO DIE!!!1!!

And it’s belly was just massive! Distended even… OMGOMGOMG WHAT IS WRONG WITH MY CHICK?!?1?

Nothing was wrong, the “poop” wasn’t poop, it was just normal hatching gunk, and the distended belly is caused by the chick absorbing the yolk just before hatching. The yolk thing isn’t new info for me, but apparently sometimes it’s a big yolk and leaves the chick rather swollen looking.

Chick 1 was so swollen it was rolling around like a turtle stuck on its back, but as the chick dried out and fluffed up, and the yolk started doing its intended job of nourishing the newly born chick, things started looking more normal.

I left the chick in the incubator to finish drying while the other two eggs hatched– Did you know that a baby chick can survive up to 3 days without eating or drinking after it hatches? Since hatches often take more than a day, the first to hatch are able to stay under their mother until their siblings finish hatching without suffering any ill effects. After that the mother will take her entire clutch out of the nest into the world to start teaching them to eat and drink.

Chick 2, from Gwen’s egg, hatched about an hour later. Same gunk, but it’s belly wasn’t near as big. Of course this chick was bigger so maybe it had a little more room in its belly.

Phoebe’s egg was making no progress. Instead of zipping, it pipped a second time right next to the first, but still had not managed to detach even a little bit of the shell.  I decided to interfere and after a lot of reading and preparation I pulled the egg from the incubator and carefully finished the zip and removed the top. I worked only a few minutes at a time, returning the egg to the incubator to keep it warm and moist.

Once the egg was opened by me, I could tell the chick was rather tightly packed into the egg and poorly positioned. Phoebe is a pullet (a hen under a year old) and her eggs are smaller than they will be as she gets older. I guess it was just a little too small for her chick. I knew setting pullet eggs could be an issue, and this knowledge was part of the reason I felt it was a good idea to interfere. Most of the time, if a chick can’t complete a hatch, there’s probably a good reason and it’s better to just let it die in the shell as nature intended.

Chick 3 rested a bit in the opened egg until one of the other chicks fumbled about and over the top of it, and then it made a mighty push and popped out of its shell to join its siblings.

Previous in this series: Salvaging out Hatch