We had a monstrously hot start to the week that left our garden and chickens gasping. We had planned to spend all of Father’s Day up at Revelwood, but it was not much cooler there, so we settled on a much shorter visit. We worked on laying out the planned porch/step for the RV.  The spot needs to be leveled, and that’s too much work for 100+ degree weather. Looks good though. 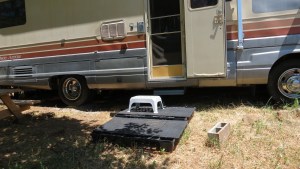 Temporary set up for our RVs “porch”

Martin did some weed whacking which was long overdue. The tall grass was so gorgeous in the Spring we let it get out of control. We will not make that mistake next year.

Jeanene thinned out some black oak saplings in preparation for our next phase of brush clearing to the north of our level area. This spot is our current candidate for a future barn/work shed, and animal enclosures. It has one fairly mature oak and lots of smaller ones, but they’re too dense in areas. We’ll let some of them get bigger before we cut them down for firewood a few years down the line.

Checked the Trail Cam– nothing but deer. They’re kind of old news at this point. It looks like the same pair that’s been up here for the last few months.

Not on the Trail Cam: As we were driving up, a beautiful California King snake popped out of the weeds a few properties down from us. It started across the road, and we backed up to get a better view, at which point it turned around and went back the way it came. Good sized and healthy looking is what you want to see in a King snake as they are known to eat rattlesnakes and word around the Woods is that there’s an increase in the rattler population this year.

On our return to the burbstead we discovered the heat had driven our broody hen off her nest. Read about how we dealt with our abandoned eggs.

Monday was the hottest day we’ve had so far this summer.  San Diego’s mostly perfect weather makes the extremes feel even more extreme. Jeanene spent the day  fussing over the chickens and the garden, providing cool water, and misting down the chicken yard several times. Everything still managed to look miserable the whole time.

Tuesday the incubator for the abandoned Chicks arrived, candling the eggs showed at least three still alive, and two possibles with only five days left before they’re due to hatch. Fingers Crossed.

Wednesday was the last day of school for Lucas. They went so late this year! Jeanene stopped at the feed store and picked up chick starter, she has faith in these eggs.

Thursday the incubator went on “lock down” and then we all went to the San Diego County Fair. We ate a lot of food, oohed and ahhed over baby goats, thanked our lucky stars that the heat wave was over, and spent too much money on a luxurious reclining porch swing we have been coveting since the last fair. 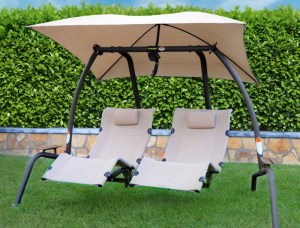 Not ours, but you get the picture. Yes, it’s as comfortable as it looks.

Friday, Martin spent a half-day working on the overgrown weed and grass issue at Revelwood, clearing our level area and also the driveway in preparation for the delivery and set up of the luxurious porch swing. Jeanene obsessed over the incubating eggs all day.

Saturday we hit up a Permaculture yard sale where we picked up a $5 A-frame level used for laying out swales. Then we bought hatching eggs from a local breeder. Now that we have the incubator, and our planned hatch of 11 eggs is down to five, we’re upping the ante.  Day 20 of the current hatch, no signs of progress. Let the stress begin!

Sunday (today) is supposed to be hatch day (day 21), but the eggs still show no signs of impending hatch: no rocking, no peeping from inside the egg, no sign of external pip. However, it’s hardly been a perfect incubation, and it’s not unheard of to have a late hatch especially when the conditions are less than perfect. We’ll keep hoping for the best and let them incubate for at least two more days. In the meantime, Jeanene started the new eggs in the tempubator to give them a head start. AND one of the other hens is going broody. We may give her a few of the new eggs, and split the hatch between incubator and hen. However, after Phoebe’s poor showing, we’re a little hesitant.

Next week: Hatch Watch will continue, new eggs will be in the incubator or under a hen at some point, Martin is working on tanning the rabbit pelts he got from the rabbit processing workshop he took, and we should get to the coop raising project this week too, if not later today.

Hope everyone had a fantastic week!