Our next major addition to the Burbstead (our current suburban location) is going to be rabbits. Luckily for us, the San Diego Urban Homestead group on Meetup just held an excellent rabbit processing class and I was able to attend.

The homestead that hosted the class is amazing. They raise chickens, turkeys, guinea fowl, peacock, rabbits, pigs, and horses. In the spring they had several pig processing classes, but that isn’t anything we’re ready for at this point. It didn’t occur to me until later that it might have been a great opportunity to bring home some ‘beyond organic’ pork. If they host one next year, I’ll check it out for sure. 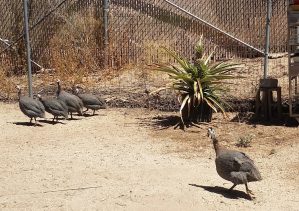 The couple that hosted the meetup did a great job showing everyone the ropes, and let everyone get as involved (or not) as they chose. The one thing they handled themselves was killing the rabbits, as a mistake in that step could result in a painful or traumatic death for the animal. I won’t go into detail here, but I was glad to see this was done quickly and with as little stress on the rabbit as possible.

I know this is an area of homesteading that not everyone agrees with, and I respect everyone’s choices. It’s never easy, but we appreciate what the animals provide and do everything to provide the best possible environment for them until the last moment.

I skinned two rabbits and was able to keep both pelts to use for future projects. My only previous experience with skinning was a baby rabbit that one of our dogs killed, and I wasn’t able to keep such a soft pelt intact. These two are in the freezer right now, waiting for a chance to start the tanning process, which I’ll detail in an upcoming post. I also brought home the hearts, livers, and kidneys for the dogs, but left the rest of the rabbits for the hosts.

Up next, after the tanning post, will be a project post about building a rabbit hutch, and some background on why we chose rabbits over quail or some other popular backyard animal.