Phoebe’s been on her eggs since June 5  and it’s time for the second candling.  I did the first around day 6 which was a day or two early thanks to a broken egg in the nest that required a big cleaning. Since I had to wipe down the eggs anyhow, I went ahead and candled then.

We were down to 10 eggs thanks to the broken one, and of those ten, seven were definitely viable, one (Phoebe’s own egg) is too dark shelled to see anything but the air sac, which looked good, but there’s no way to judge viability from it. One of the blue eggs is also hard to candle. You can see a little more of what’s going on inside than in Phoebe’s olive-green egg, but not enough to make a judgment call. The final egg, one of Bucky’s didn’t show any signs of viability.

Bucky is my favorite hen, and it sucks that one of her eggs wasn’t developing, but I was prepared for this. A couple of days before when Phoebe was off her nest for her morning constitutional, I did a quick visual check and the count showed an egg missing. She had managed to “lose” an egg under the straw of her nest. It was cold and had obviously spent the night beyond the reach and warmth of her fluffy butt.

But because Bucky is my favorite, I put the egg back under her just in case. Sometimes eggs can fool you, and it wouldn’t hurt to give it a chance at this stage.

A couple of days after that, she broke another egg. It had a viable embryo in it. We had a Mad Science! moment where I ran through the house with an embryo on the half-shell to show Martin and Lucas before they left for music lessons. 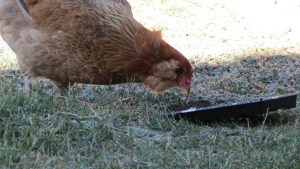 Phoebe having a snack while on her morning constitutional

Now that we’re up to speed, today’s candling:

Every morning Phoebe goes walk-about. She stretches her legs, has a bite to eat, takes a massive dump (omg, broody poo is the worst!) It’s a perfect time to candle her eggs while she’s getting her “me time” in.

Of the nine eggs six remain viable, Phoebe’s egg and the blue one with the thick shell remain a mystery, and Bucky’s out-in-the-cold egg hadn’t changed since last time and was removed from the nest. We’re down to eight. 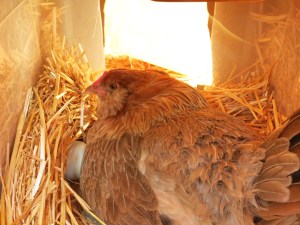 Phoebe back on her eggs, though not finished tucking them back under.

We’re past the half-way point now. If I candle again it will be on or before the 23rd, if not– Hatch day should be around the 25-26th. Though eggs in an incubator invariably hatch after 21 days, eggs under a broody often arrive on day 20, which in this case is the 25th.