Houston, we have a problem.

I’ve been concerned about Phoebe’s penchant for breaking eggs since the first episode early on. One or two broken eggs under an inexperienced broody isn’t necessarily a sign of a bad momma hen as accidents can happen. Generally, though it’s the larger hens that have this issue. Phoebe is not large, but I wanted to give her the benefit of the doubt.

It’s not unheard of for hens, broody or not, to break eggs and even eat them. Sometimes to the point that you have to cull the culprit because she is defeating the whole point of the process. Eggs are for people to eat, and you can’t eat them when a chicken keeps beating you to the punch. Once they develop a taste for them, it can be a chore to break them of it.

Gwen, our oldest hen, has had a couple of issues in the past. The trick that worked for me was to simply blow out an egg and replace the insides with yellow mustard. The egg-pecker gets a snoot full of mustard and they reassess their dining options.

On Sunday, we visited Revelwood for Father’s Day. Picked up Sandwiches at Dudley’s Bakery (a San Diego Icon) and had a nice little low-work day. It was blazing hot, which helped us from getting carried away. We are not good at pleasure visits, it always ends up with us trying to get something done and the next thing you know, we’re hot, sweaty and filthy.

Thanks to the intense heat, we didn’t need to do anything to get hot and sweaty and it kept us in check.

On returning home, Phoebe wasn’t on her nest. The poor thing  was hunkered down in the shade panting and looking miserable. There’s plenty of shade in her private run, but at 103 degrees, I imagine the broody box was stifling whether it was in the sun or not. 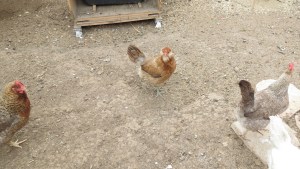 Phoebe back in the hen yard, and NOT on her eggs.

I let her out into the main backyard and the other chickens as well so they could get on the grass where it was cooler and I ran the hose for them and filled up extra water bowls with nice cold water for them to take the edge off the heat.

I’d been trying to keep my interference with her nest to a minimum as she’s fairly flighty, but I checked on the eggs while she was out and found another mess of a broken egg. Worse, one egg was missing completely.

My options at this point were limited. We don’t have an incubator and I really didn’t want to invest in one as they’re quite spendy– especially for the nicer ones that get decent reviews. On the other hand, there’s only one week left and I really, really want to hatch these eggs because they’re from our own hens and our deliciously departed rooster, Dinner

And again, one week left. We are so close.

So, incubator it is. Next Problem: It’s Sunday at 5:30 pm. Half the feed stores in town that might carry an incubator in stock aren’t even open on Sunday. The others close early. I opted to go with Amazon even though the best I could do was two day shipping (arriving on Tuesday)  I figured that at least it would be on the way already if it turns out the local feeds store don’t have the one I want in stock.

Next Problem: How to keep them from dying until Tuesday.

First thought was the heating lamp I use for brooding baby chicks in the house. Problem the third: can’t find it. Found the lamp, but not the special red bulb that goes in it. No clue where that went.

The only thing I could come up with was a heating pad. 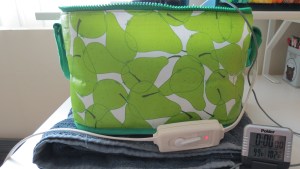 Ikea soft sided cooler with a heating pad and a probe thermometer for my makeshift incubator.

I stayed up until 2 am trying to get the temp regulated at an even 100 degrees (eggs hatch at temps between 99-103.) I thought I had it figured out, but when I woke up in the morning, the temp had risen to 105. Not good.

I have no Idea how long it was at that temp, but it couldn’t have been more than a few hours. I immediately hit up the internet to see if 105 degrees resulted in an insta-kill, but there were several people sharing their experience with temp spikes in incubators (apparently it’s not just the heating pad with issues) who managed to have at least partially successful hatches afterward.

I got the temp back down to 100 and it’s holding steady now. All I can do now is cross my fingers that I can get them through until the incubator arrives and is up and running.

It’s going to be miracle if any eggs survive to hatch day, but I’m not giving up yet.

On a more positive note, once I have an incubator, I’ll no longer have to depend on a broody hen if we want to set eggs. Although, I greatly prefer to let a momma hen handle both the hatch and the raising of chicks as it’s more economical and requires far less work on my part.

Positive Note part two: I’ll get some fabulous pics of the actual hatch and I won’t have to squat in the hen house half the night to do it.

Everybody cross their fingers and wish us luck.